Mercom India Has A List of Top Solar Players of 2020

Mercom India has released the list of top solar players of India of 2020 in various categories.

Because of the COVID, the Indian Solar Sector saw a record decline in the market. And now because the 2nd wave has come, the market is not expected to grow till next year. The total installed capacity in 2020 was 3.2 GW which is 52% less in comparison to 2019.
Let’s see what are those categories and who were the top solar players along with their market share. 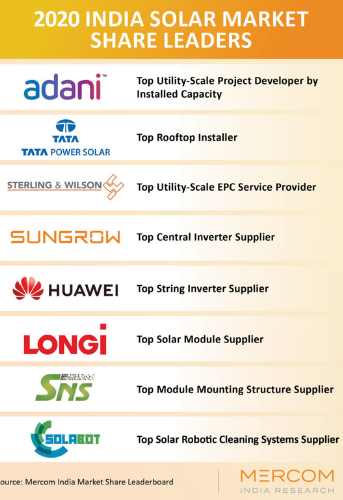 In 2020, the major shares of the utility-scale of the solar market were captured by Adani Group. The 2nd top player was Azure Power.

EPC providers were the ones to suffer a lot in this pandemic. Due to the COVID 19, many projects moved to 2021 and in 2020 they also saw a lot of issues with the land acquisition.

In all of this, Sterling & Wilson was the top player among the Utility-scale EPC followed by Tata Solar Power to be the 2nd player.

In the case of rooftop solar installation, the solar sector saw a record decline. In 2020, rooftop solar declined by 35%. Tata Solar POwer was the top player among the rooftop solar providers followed by Fourth Partner Energy to be the 2nd top on the list.

To boost the local and domestic manufacturing of Solar Inverters, GOI raised the customs duty on solar inverters from 5% to 20%.

In 2020, the top solar inverter provider was the Sungrow in the category of central inverters.

In the category of string inverters, Huawei was the top player.

In the category of solar module providers, Longi was the top player and Jinko Solar was the second top player.

Solar Robotic cleaning is a new market that is growing at a very rapid rate in India. Now MNRE is also recommending using robotic cleaning systems to reduce the water consumption in solar cleaning.

Solabot Technologies was the top player in this category in 2020.