What is Power Purchase Agreement? What are The Benefits of It?

Electricity is necessary for both economic and social growth. Businesses, industries, residences, schools, hospitals, and other infrastructures require electricity to function properly.

In many developing countries, there is a significant gap between demand for power and supply. Expansion in electricity generation capacity is necessary to minimize the gap. To achieve this financial demand, the government is recognizing the necessity of cooperating with private-sector investors. Any independent power-producing project, particularly in emerging markets, has to have a Power Purchase Agreement.

What is a solar power purchase agreement?

A solar power purchase agreement (PPA) is a financial contract, in which, a developer pays for the design, permitting, financing, and installation of a solar energy system on a customer’s property. The developer sells the generated electricity to the host customer at a predetermined price that is lower than the retail rate charged by the local utility. The developer obtains the cash from these sales of electricity, as well as any tax credits or other incentives created by the system, while the consumer receives a lower electricity price to offset their grid purchase. 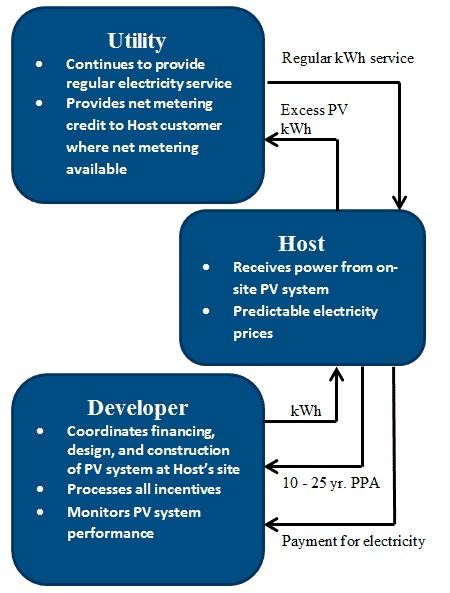 The developer handles the initial expenditures of sizing, sourcing, and installing the solar PV system, therefore, there are no or low upfront capital costs. The host customer can embrace solar with no upfront expenditure and start saving money as soon as the system is operational.

Solar power purchase agreements are constructed in one of the two ways to give a set, predictable cost of electricity for the duration of the agreement. The price a consumer pays climbs at a predefined rate, usually between 2% and 5%, under the fixed escalator plan. This is usually less than anticipated utility price hikes. On the other hand, the fixed pricing plan keeps the price constant during the PPA’s term, saving more consumers money when utility rates rise.

System performance and operating risk are the developer’s responsibility.

Developers are often better positioned to take advantage of potential tax credits to lower system costs. Municipal hosts and other public entities with no taxable revenue would not be eligible for the Section 48 Investment Tax Credit otherwise.

Increased property value: Solar PV systems have been found to raise the value of residential properties. PPAs can be transferred with the property because of their long-term nature, allowing customers to invest in their house for little or no money.

PPAs allow the host customer to save the upfront capital costs of establishing a solar PV system while also streamlining the procedure. The power purchase agreement model, however, is facing regulatory and legislative challenges in several jurisdictions, which would regulate developers as electric utilities.

A solar lease is a type of third-party financing that is comparable to a power purchase agreement but does not need the sale of electricity. Instead, customers rent the system like they would a car.

The system is held by a third company in both circumstances, but the host consumer benefits from solar with little or no upfront fees. These third-party financing solutions have become the most popular way for clients to take advantage of solar energy’s benefits.

Colorado, for example, entered the market in 2010, and by mid-2011, third-party installations accounted for more than 60% of all residential installations, rising to 75% in the first half of 2012. This increased tendency can be seen in all states that have implemented third-party fundraising.

SRECs: Solar renewable energy credits (SRECs) demonstrate the solar energy used to generate a particular amount of power. They are frequently purchased and sold by load-serving companies (usually regulated utilities) to meet state-level renewable energy mandates. Consumers who willingly purchase SRECs for marketing claims or other purposes also use them. SRECs are usually owned by the developer in PPAs. When engaging in a power purchase agreement, customers must understand who owns and can sell the SRECs generated by the PV system, the risks associated with SREC ownership, and the PPA price tradeoffs.

How to finance: While both third-party financing schemes have their advantages, buying a PV system altogether has its own set of advantages. Anyone thinking about building a solar PV system should look into all of the available financing alternatives to find the best fit.

Site upgrades: While the developer is responsible for the installation, operation, and maintenance of a solar PV system, the host customer may need to perform property improvements to facilitate the system’s installation, reduce installation costs, or comply with local legislation. Rooftop maintenance or tree pruning that shades the PV system are examples of this.

Procedure to Get a PPA

So, we now know that the power purchase agreement is the most crucial requirement for an MW-scale power plant. What are the processes for obtaining a PPA?

Determine the approximate area available for PV installation, taking into account any possible shade. The locations could be on roofs or on the ground. 5–10 watts (W) per square foot of available rooftop or other space is a standard guideline for solar installations.

Regional policies differ from one place to another. PPAs are signed at different tariff rates depending on the location. As a result, choose a policy that will provide you with a PPA with profitable returns.

Following the selection of a winning offer, contracts must be negotiated, which is a time-consuming procedure. In addition to the PPA between the government agency and the system owner, there will be a lease or easement specifying access terms to the land (both for construction and maintenance). Sales of RECs (Renewable Energy Certificates) may be included in the PPA or added as an annex.

The system owner (developer) is normally responsible for the filing of permits and rebates. However, the government agency should keep track of filing deadlines as state-level incentives may have restricted windows or auction processes.

The developer will next acquire, install, and commission the solar PV equipment after completing a full design based on the term sheet and more specific measurements. The commissioning process verifies utility connectivity and allows system startup. Once again, this must be completed within the timeframe established by state incentives. Failure to meet the deadlines may result in benefits being forfeited, which will most likely modify the electricity price charged to the government agency under the contract. PPAs typically specify realistic developer duties as well as a procedure for calculating monetary penalties in the event of non-performance.

PPAs in the Government/Utility Sector: Challenges

Hope this information about “Power Purchase Application” helps you.