Why Should You Choose Half Cut Cell Modules For Your Solar Projects?

The half-cut solar cell technique boosts solar panel energy output by lowering the size of the cells, allowing more to fit on the panel. The panel is then split in half so that the top and bottom operate separately, resulting in more energy being produced – even if one side is shaded.

That’s the high-level picture; we’ll break down the steps below.

The number of solar cells in traditional monocrystalline solar panels is normally 60 to 72, thus when those cells are chopped in half, the number of cells increases. Half-cut panels typically feature 120 to 144 cells and are constructed with PERC technology, which improves module efficiency.

A new form of “series wiring” for the panel, or the way the solar cells are wired together and pass electricity through a bypass diode within a panel, is the key to half-cut cell design. The bypass diode, shown in red in the figures below, transports the electricity generated by the cells to the junction box.

When one cell in a conventional panel is shaded or defective and stops processing energy, the entire row within the series wire stops providing power.

Let’s take a look at the standard 3-string series wiring method, for example: 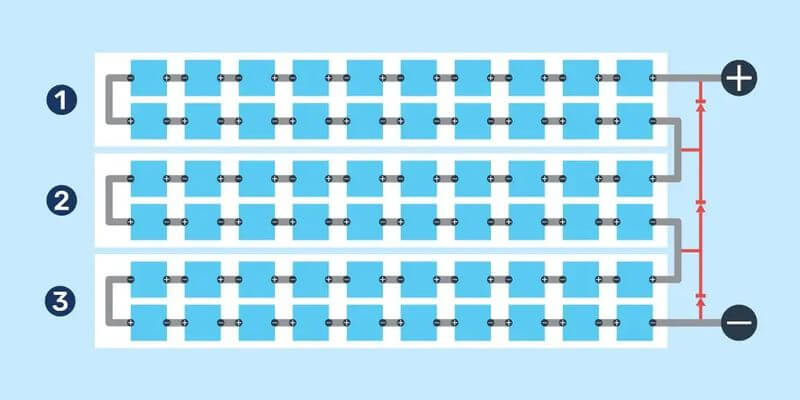 If a solar cell in Row 1 does not receive enough sunlight, every cell in that series will not produce electricity, according to the standard whole-cell string series wiring depicted above. A third of the panel is removed as a result of this. 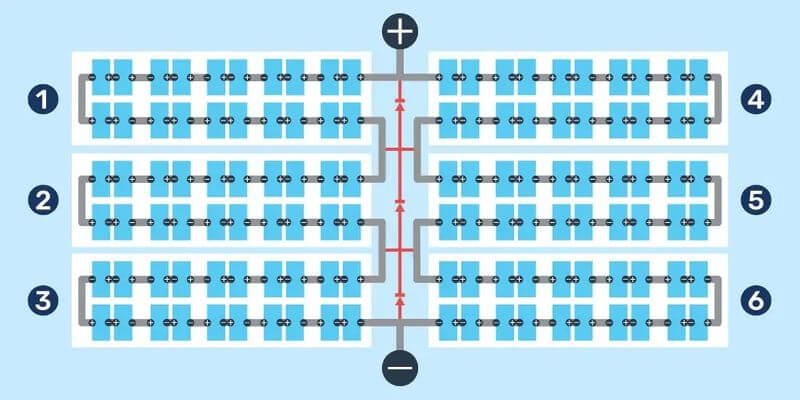 If a solar cell in Row 1 is shaded, all of the cells in that row (and just that row) will stop producing electricity. Because only one-sixth of the panel has stopped providing power, instead of one-third, Row 4 will continue to produce electricity, generating more energy than standard series wiring.

You can also notice that the panel has been split in half, resulting in six total cell groupings rather than three. Instead of connecting on one side like the usual wiring above, the bypass diode connects in the middle of the panel.

One source of power loss is when current transportation happens and is known as resistive losses. Solar cells transport current using busbars which are connected to neighboring wires and cells, and moving current through these busbars leads to some energy loss. By cutting solar cells in half, the current generated from each cell is halved, and lower current flowing leads to lower resistive losses as electricity moves throughout cells and wires in a solar panel.

Half-cut cells are more resistant to the effects of shade than traditional solar cells. This is not due to the cells being cut in half, but rather a result of the wiring methods used to connect half-cut cells in a panel. In traditional solar panels built with full cells, the cells are wired together in rows, known as series wiring. In series wiring schemes, if one cell in a row is shaded and not producing energy, the entire row of cells will stop producing power. Standard panels typically have 3 separate rows of cells wired together, so shade on one cell of one row would eliminate a third of that panel’s power production. Half-cut cells are also wired in series, but because panels made with half-cut cells have double the number of cells (120 instead of 60), there are also double the number of separate rows of cells. This type of wiring allows panels built with half-cut cells to lose less power when a single cell is shaded because a single shaded cell can only eliminate a sixth of the total panel power output.

With the increase in power output per module, the number of modules required for generating the requisite power in a land-based and rooftop solar power plant decreases which helps in reducing the space required for installation.

Hope this information about “Why You Choose Half Cut Cell Modules For Your Solar Projects?” helps you.

If you are planning to start a solar business or install a solar solution, you can connect with Ornate Solar to get the best assistance with the best prices for solar panels and inverters. We are the official partner of Canadian Solar panels & Renewsys solar panels in India.