Indian PM Narendra Modi recently announced that India is now one of the leading solar power-producing nations in the world. With an installed capacity of over 60GW, the Indian Solar Sector is experiencing an astounding growth trajectory.

What’s more, India is now taking the lead in promoting solar power around the globe with the mission to boost global energy access and security through the International Solar Alliance (ISA).

International Solar Alliance is an intergovernmental body launched in 2015, during the COP21 Summit in Paris, France by Indian Prime Minister Mr. Narendra Modi, and the former president of France, François Hollande.

ISA has a lofty mission- to ensure that ‘every home no matter how far away, will have a light at home’. To achieve this goal of promoting universal energy security, ISA focuses on deploying solar energy technology across the world.

As the world’s access to solar infrastructure grows, solar power is becoming much more affordable. Mr. Ajay Mathur, the Director General of ISA states, that by 2030, solar plus storage will become the cheapest form of electricity in most parts of the world. Moreover, there will be a further 40 to 60% cost decline in the power source by 2050.

However, not all parts of the world can benefit from this changing landscape. Many countries such as those in Africa and Latin America are unable to attract investment in the sector despite having enormous solar potential.

To tackle this key issue of energy access, ISA is focussing on project preparation and implementation in the Least Developed Countries (LDCs) and Small Island Developing States (SIDS). As per ISA, these projects are expected to “act as a trigger for technology advancement and policy change” and also develop financial and human capacity in countries.

Towards 1000: An Ambitious Goal

The initiatives launched by ISA are guided by the following targets:

• Unlock an investment of USD 1,000 billion in solar energy solutions by 2030
• Deliver Renewable based energy access to 1000 million people
• Installation of 1000GW solar power capacity
• Mitigate 1,000 million tonnes of CO2 every year through these measures

To achieve these targets and bring about the change it seeks, ISA has partnered with multilateral development banks (MDBs), development financial institutions (DFIs), private and public sector organizations, civil society, and other international institutions.

Develop global annual reports around solar technology, solar investments, and solar markets. These will provide governments with insights into how their nation’s untapped solar potential can be harnessed and the policies that can be implemented to facilitate this change.

Provide Support for boosting solar projects and solar equipment manufacturing capacity in countries. Moreover, strengthen solar ecosystems through training programmes to equip people with the skills and knowledge about the industry.

Setting up sustainable solar projects in those countries which are impacted the most by climate change, generating the demand for solar solutions, and improving access to funding.

The 5th Assembly of ISA

The assembly is the apex decision-making body of the alliance. It discusses the objectives, functioning, and budget, apart from analysing the projects and initiatives that are being or are to be implemented.

Currently, 101 countries are part of the alliance. India holds the president’s office, with France acting as the Vice-President. 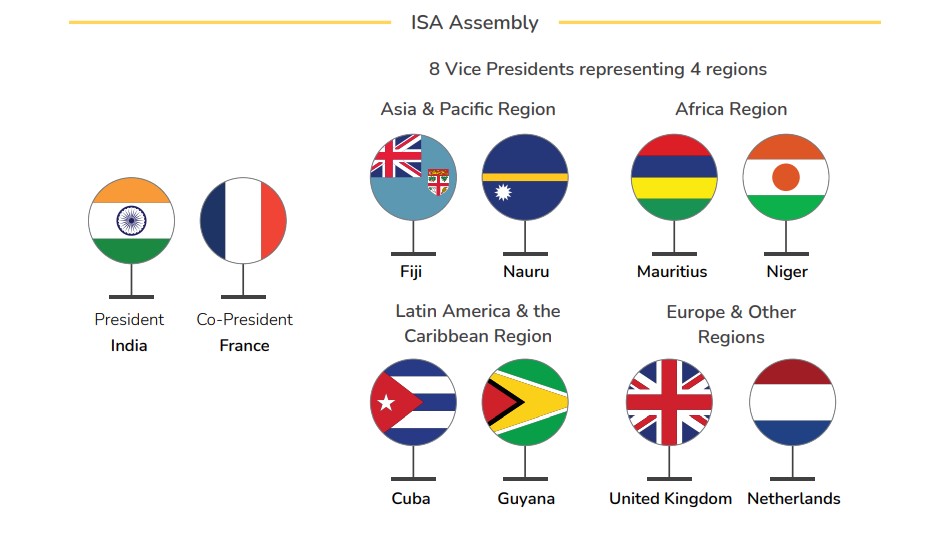 In October 2022, New Delhi’s hosted the 5th Assembly of the International Solar Alliance from 17th-20th October. Union minister of Power, New and Renewable Energy, R.K Singh presided over the event, with Ms. Chrysoula Zacharopoulou, the minister of development, Francophonie and International Partnerships, of the Republic of France as the co-president of the assembly.

Here are the key takeaways from the event:

According to sources, 85% of the world’s solar panel supply comes from China. This market dominance has led to supply-demand imbalances. Moreover, Director Mathur explains that the rise in freight prices and the Covid-19 pandemic further created supply chain constraints that increased module prices by 15-20%.

To benefit from the affordability of solar energy, Mathur calls for “multiple regions from which solar photovoltaic products can go from the producer to the supplier.”

To shorten supply chains, ISA is focusing on capacity building. It is working with training organizations to enhance human capital. Further, the alliance is not only helping set up power plants but also helping nations develop manufacturing facilities to create an entire solar ecosystem.

While many countries in Africa have a high solar potential and a growing demand for clean energy, they aren’t able to harness the same due to a lack of investment. In 2021, out of the $200 billion global investment flows in solar energy, only 5% made their way to Africa.

The majority was received by projects in China and OECD countries (Organisation for Economic Co-operation and Development).

The biggest apprehension among investors about investing in the untapped markets of Africa is the risk associated with the same.

The solar facility aims to encourage the flow of private capital into the ‘underserved markets’.

ISA will accumulate the funds which will go towards projects in areas that are unable to attract investor attention. It will allow projects to purchase a payment guarantee or a partial insurance premium.

3. The Draft Document of the One Sun One World One Grid (OSOWOG) Declaration to be Approved Soon.

One crucial initiative of ISA is to create a One Sun One World One Grid (OSOWOG), a global interconnected grid network through which energy can be shared across borders.

Union Minister, R.K Singh has said that the draft for OSOWOG is ready, and will be open for signature from member countries, once approved.

He also said that the Indian government has set up a technical team within the ministry of power to study the feasibility of an interconnected transmission network. 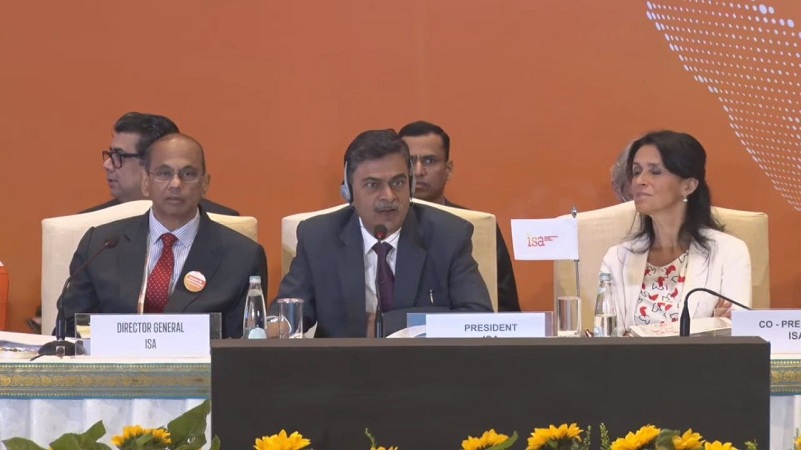 In contrast to China’s controversial, One Belt One Road initiative, which is being accused of creating a debt crisis in countries, India’s ISA initiative is aimed at developing the world’s economies through the route of solar power.

Through the alliance, India is not only contributing towards a sustainable future but also strengthening its diplomatic relations.

It would be worthwhile to see how the International solar alliance, fulfils its mission of ‘making the sun brighter’ in the coming years.

By partnering with the best-in-class solar panel and inverter brands from around the globe, Ornate Solar has made the shift to solar, cost-effective, reliable, and easy. We provide a one-stop shop for top-quality solar accessories that can be customized as per your requirements.

We have also developed India’s first Integrated In-Roof system. Ornate InRoof is a roof that is completely made out of solar panels, is leak-proof, and looks aesthetically pleasing.

If you are exploring solar solutions for your business, reach out to us at 011 4353 6666 to discuss your options.