Are Microinverters Better Than String Inverters for My Solar System?


String Inverters are the simplest and lowest cost option. When using a string inverter, all the energy your solar panels create travels to a single source where it is all converted. There is one large inverter installed on your home next to your utility meter. It is approximately the size of a wall-mounted water heater. These types of inverters are best for solar systems that receive full sun and have panels mounted in one large grouping. String inverters convert the total energy based on the lowest-performing panel. So, all panels must be behaving at similar levels for the most energy to be gained from the system. If one panel has a branch shading it by 30%, you will only receive 70% of your total system’s possible production. The lowest-performing panel dictates the production of the entire system.

In contrast, microinverters are much smaller and are placed on the back of each solar panel. They convert each panel’s DC to AC at the source of creation. Each microinverter works independently from the rest of the panels, converting the amount of energy that each solar panel is generating. Microinverters tend to cost a bit more but are a crucial part of getting the most energy out of systems with unique specifications. Microinverters and string inverters both have their strengths and weaknesses. Microinverters will be a better option in situations where the panels will be affected by shading or when panels need to be facing different directions on the roof. String inverters, as a cheaper solution, will in most cases be the best option when there are no shading issues and several panels can be installed facing the same direction on the same roof surface Strings of panels traditionally could be compromised in a shady environment as one panel shaded would reduce the output of all panels connected on the same string. High-quality panels have bypass diode so an individual cell that is affected by a leaf, or bird dropping will not affect the overall performance of the panel or the other panels on the same string.

String inverters need to be replaced every 10 to 15 years, adding cost and the inefficiency of maintenance to solar systems that use them. Microinverters from Enphase are tested for 20 years of performance, something string inverters don’t have. If you’re looking for a low-maintenance solar product, microinverters may be the way to go.

Microinverters convert DC to AC at the module, which is safer for workers and homeowners. Solar modules can generate a voltage of as high as 1,000 V on a roof whereas a micro-inverter lowers that to 60 V and is in the safer AC. Depending on the value homeowners put on safety, microinverters may be an attractive option for their roofs.

NO SINGLE POINT OF FAILURE 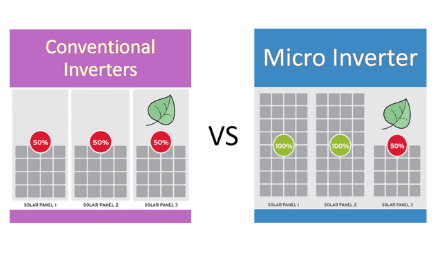 Panel orientation may not be the same for all panels in your system to give the best performance, but with a string inverter, you will typically need all panels in that string facing the same way. With a micro-inverter system, you can orient the panels individually for optimal output. If you have tall buildings or trees near your roof, shading may become an issue. With a string inverter if one or two panels get shaded it can affect the entire string by as much as half of its total performance. With micro-inverter panels, it is the only shaded ones that are affected while the rest of the system keeps performing.

The installed system will be more easily expanded with a micro-inverter solution. So if you’re budget-constrained and putting in, say, a 3kW system today but want to expand it in the future, micro would be the better option.

Larger systems can have voltage drops across the longer distances that are more significant with AC than with DC. This means that a micro-inverter system may lose more power transmitting the converted AC electricity than a DC transmission which is then converted at the end by a string inverter. 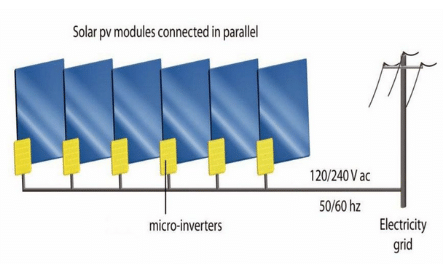 Often the string inverter(s) are mounted near the main electrical supply, so maintenance is more straightforward than with a micro-inverter for which the contractor will need to get on the roof and remove the solar panel to get access. Micro-inverters are a newer technology, and as such have not been tested in the field for many years to provide reliable long-term performance data. Because of this, it is argued that there may be risks of failure after several years under the heat at the back of a solar panel. Cost – typically the micro-inverter solutions are 5 % to 25% higher than string inverters. However, this cost is coming down as the technology is more widely accepted. The cost is further marginalized when the benefit of no DC wiring in the system is taken into account.

At Ornate Solar our goal is to design the perfect solar system for you. This includes equipment type, panel placement, number of panels, and inverter type. We design your system to ensure it produces the most energy possible at the lowest rates available. If you are ready to speak to one of our friendly solar experts, please call 011-43536666 or email info@ornatesolar.com