What are Floating Solar Plants? (A Complete Guide)

A few years ago, it would have been hard to imagine that we can generate electricity over the water surface. All we knew was- if you mix the two, you will get an electric shock! By this logic, one would wonder, how is a floating solar plant not a fire hazard?

But advancements in technology have turned this unexpected combination, of water and electricity, into a dependable solar solution.

Now, multi-megawatt solar projects are being set up over water bodies- to meet the rising power needs.

But what are these structures, and how do they work?

What is a Floating Solar Plant?

In floating solar systems or ‘floatovoltaics’, solar modules are made to float on water. The panels generate energy, that gets transferred to a transmission tower through underwater wires.

The first floating solar structure emerged in 2007, in Japan. But the plant was very small (20 kW) and got constructed for research purposes only. Seven years later, in 2014, the average capacity increased to 0.5 MW but scientists were still struggling to make this project work on a bigger scale.

The turning point came one year later when a larger plant of 7.55 MW got installed in Japan. After that, multi-megawatt capacity plants were established in many countries, especially in Asia.

We have more than 400,000 square kilometres (km2) area of man-made reservoirs in the world. If we go by this figure, then the potential for floating solar plants would be on a terawatt scale.

The Components of Floating Solar Plant


A floating solar plant structure consists of a buoyancy body that carries the PV modules, an anchoring system with mooring lines, and a power converter with cables.

The buoyancy body is made of polyethylene that can withstand 2.5 times its weight. It remains steady despite the water-level fluctuations. The vertical and horizontal frames are constructed out of anti-rust material. And, the solar modules have to be lead-free, dust-proof, and resistant to humidity and the effects of constant water jets. Moreover, the wires are insulated as they stay underwater.

The design of the system can vary.

For example, India’s largest floating power plant in Telangana is unique in its construction. The 100 MW Ramagundam plant is spread into 40 individual blocks. Each block has a floating surface that carries 11,200 solar modules.

It is unique because all the electrical equipment, from the inverter, and transformer to the supervisory control and data acquisition, is set up on floating Ferro-cement platforms. It doesn’t float away because the body is anchored to concrete blocks on the reservoir bed, through high modulus polyethylene ropes.

Before mounting, a thorough study of the topography of the water bed, its depth, and the water level variations is carried out.

But why go to such lengths when you can install a solar plant on land?


Acquiring land for solar projects is a difficult process. Power plants require large areas, which can be a huge financial burden. Land which is not suitable for agriculture and construction purposes has become scarce.

Also, solar plants are often set up in remote locations. Hefty investments have to be made in infrastructure, for transporting the power, and operation and maintenance. If projects are located in hilly terrains, site preparations get done, and the capital expenditure shoots up.

Keeping this lack of land availability in mind, solar developers have begun exploring water as a viable option. And they have been successful. Research has shown that floating solar photovoltaic power plant has 10.2% more generating capacity than land-based PV systems.

Where Can These Plants be Installed? 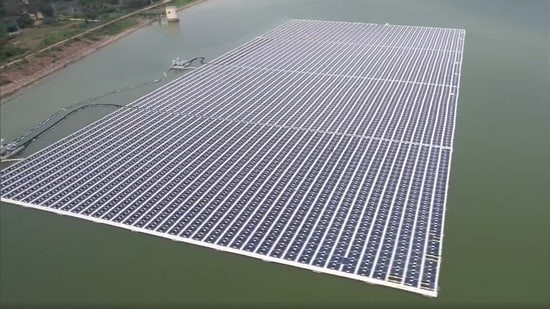 Floating solar plants are generally installed over artificial water bodies such as reservoirs and dams.

Man-made water bodies do not experience large waves. In the seas, such a system would have to withstand being hit by constant waves. Design and operation costs would increase significantly, as a result.

Solar energy is a green source of energy. But that green aspect is no longer applicable if a solar structure is damaging the environment. So, understanding the impact of floating solar plants is vital.

Studies have shown that these solar structures have a mostly positive impact. The floating body absorbs the sun’s radiation the water would absorb, thus preventing evaporation.

Water saving can be significant.

The plant also prevents algae growth which can be harmful to humans. Further, there has been no evidence that the plant harms the flora and fauna of the location. However, studies are still being conducted on this topic.

Moreover, it is generally seen that local community lives are affected by massive solar farms in the vicinity. But solar farms set up in water do not pose this problem. Since the dam infrastructure is already there, people are not displaced as well.

Overheating of a solar panel can reduce its generation capacity. Floating solar plants solve this problem. The water provides a natural cooling effect, leading to a higher generation.

Studies have found that -the electricity generated from these systems is higher than that in ground-mounted and rooftop solar systems. The energy performance increases by at least 13%.

Land can have many productive uses, such as agriculture, housing, tourism, etc.

Installing a large-scale solar plant would limit this potential.

Also, the installation process requires clearing away the trees and forests from the terrain- a step that goes against the promise of eco-friendly energy production.

We have already learned that setting up floating bodies over water surfaces, can prevent evaporation.

Moreover, According to CEEW (Council of Energy, Environment and Water), about 20,000 litres of water per MW is required in the cleaning of a plant. This water goes back into the reservoir as well.

The co-location of solar and hydropower increases the ability to meet the peak demand of an area. Moreover, it reduces the over-reliance on one source of energy.

In densely populated countries, every space is in high demand. Many areas come under conflict, with different groups having different ideas on how to use a space.

Floating Solar plants sidestep this problem by using a space that might otherwise go unutilized.


1. The significant expenses required to set up a floating solar project remain the biggest hurdle. The high cost of the plant is due to the following reasons:

2. The presence of electricity and water together, presents some major safety concerns. Since the cables are underwater, greater consideration has to be given to insulation testing.

3. Even though extensive research about the technology has been conducted, some uncertainty about these types of projects persists still. Can these systems be installed in colder regions? What happens if the floating body freezes?

Moreover, what all bodies of water are suitable for these installations? These questions still plague experts.

The Potential for Floating Solar Plants in India


India has a vast landmass. But, most of it is employed for agricultural purposes, residential or commercial purposes. India also has over 400 rivers, more than 5000 dams, and over 19,000 reservoirs.

It is easy to surmise that; India has great potential for setting up floating solar plants. And, the Indian government is realizing it.

In the last few years many floating solar projects were commissioned, while many others are under construction.

The three major Floating solar projects in India are:

1. World’s largest floating solar plant of 600 MW is being set up in Madhya Pradesh, India

3. The country’s second largest floating solar plant of 92 MW in Kayamkulam, Kerala was commissioned in August 2022.


By partnering with the best-in-class solar panel and inverter brands from around the globe, Ornate Solar has made the shift to solar, cost-effective, reliable, and easy. We also provide a one-stop shop for top-quality solar accessories that can be customized as per your requirements.