Open Access is a system that allows consumers with a connected load of over 1 MW, to buy power directly from power producers through the open market. The electricity is generated in solar farms and other large-scale solar power plants and injected into the grid.

This way, consumers can buy solar energy at a reduced rate and eliminate their dependence on the local DISCOM.

The Mercom Report also states that as of June 2022, India’s total installed open access capacity was over 6.5 GW. The top 5 states of Karnataka, Maharashtra, Tamil Nadu, Uttar Pradesh, and Rajasthan house 3/4th of this cumulative capacity. 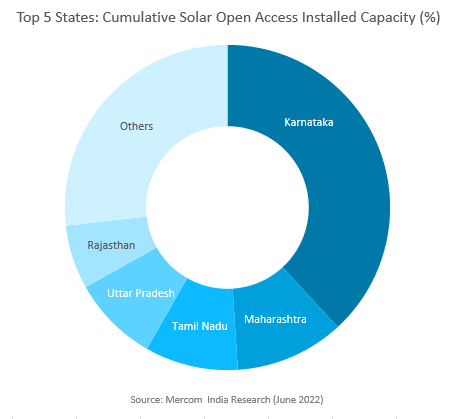 The report also notes that open access projects of about 2.8 GW are under the ‘development and pre-construction phase’. The state of Karnataka has the highest number of open-access solar projects under development, currently.

Mercom’s research attributes this growth in the open access segment, to the “increased focus on renewable purchase obligation (RPO) compliance” and “RE100 goals”.

RPO has directed all electricity distribution licensees to produce or purchase a minimum specified quantity of their power requirements through renewable energy sources. Additionally, RE100 is a global commitment towards renewable electricity made by the most influential commercial and industrial businesses.

Apart from these factors, the report also notes that ‘conducive policies’ and ‘timely approval by distribution companies’ has encouraged open access additions in Karnataka and Chhattisgarh.